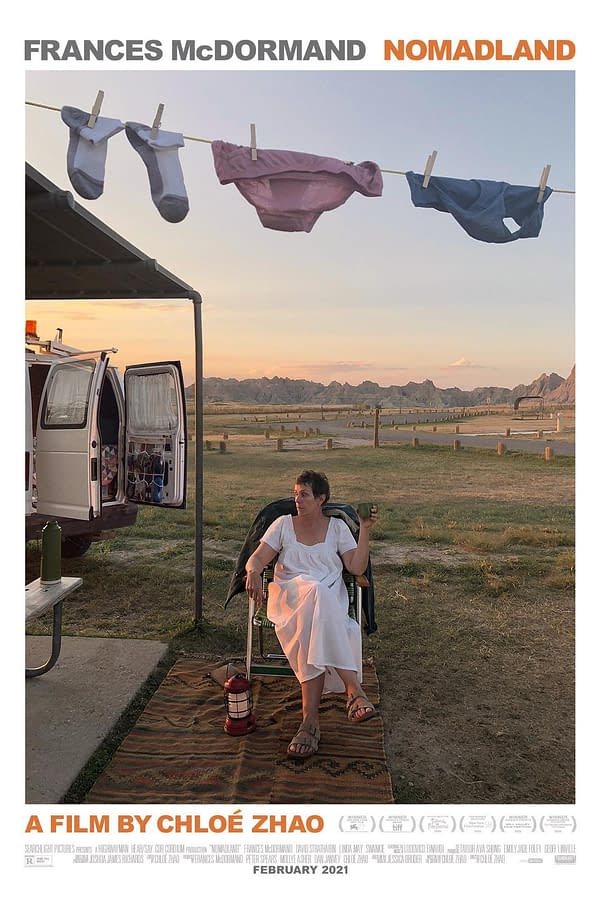 "When we become clear, we don't have to make a choice. The choice is already made." —Katherine Thanas, The Truth of this Life: Zen Teachings and Loving the World As It Is

I didn't expect to relate to a white American woman in her sixties whose whole life can fit in a van. And yet, I did. You're a thirty-three-year-old Philippine-born-Singaporean woman, what do you have in common apart from living in a van-sized bedroom, Catrina? Plenty more than meets the eye. It's so easy for the mind to fall back on the usual narratives about our differences, which steers us from the path that shows the many ways we are the same. We would still much rather dwell on and in some cases, fear, each other's differences than recognise and celebrate the forces and circumstances that unite us.

Nomadland opens with a woman raising the roll-up door of a storage space. She is bundled up and behind her is a snowy landscape. Fern, played by Francis McDormand transfers a box with some delicate dinnerware into a van. She rummages through another, which had an assortment of clothes. From it, she picks up a denim jacket and holds it tightly against her chest. Her eyes glaze over and we watch as she is transported to a memory. In the next few scenes, she continues to appear alone. We see her driving and singing to herself. She signs into a trailer park for the night, then we watch as she cooks, eats and eventually falls asleep in her van—the little santa claus lamp casting shadows in her makeshift space.

The smallness of Fern's life, matched the smallness of mine. Before moving and especially during Singapore's version of a lockdown, referred locally as Circuit Breaker, I felt very much out of balance. The eczema patch on my neck was evidence of my internal distress. I was living with my mother, working in jobs that I first thought I had ably negotiated to fit my lifestyle, but in the end cost me what little hope I had left at the time. I work as a communicator and it became harder to communicate the spectacle when people proved time and again that whenever push came to shove, many continued to live their lives with very little compassion for others.

In the middle of hostel-hopping and with no savings, I decided to use a part of my last pay-check with some money loaned to me by people I consider my family, to finally move out of where I was living and rent a room that is roughly 150cm by 500cm in the heart of the city. During the months of the pandemic, life was very small. From my room to what I did and ate every day, everything felt reduced. I am extremely lucky to be educated, to have the work experience that I do and the confidence and support of friends who would refer me the odd writing job or two, so I managed to get by. And like those who are fortunate enough to have a home during the pandemic, and like Fern and her 'Vanguard', my bedroom became my whole world.

My eczema patch eventually disappeared—the love I felt and the kindness of strangers made all the difference. You see this too, in Nomadland. There are scenes where I first braced myself and expected the worst, but aging people seemed to be kind to one another on the road in the deserts of America. One of the scenes that stood out to me was the one that summarised the film's themes. A bearded man played by Bob Wells is amidst a group at a campsite. He was speaking about "the tyranny of the dollar", the analogy of the workhorse and the failure of the current economy to provide support for the workhorses when they can no longer work.

There is in an unscripted campfire scene, where we learn the stories behind people's nomadic existences. Some had goals and the lifestyle was simply a means to an end. Some had families, but were cut off from them. Some were young and heartbroken. Many were avoiding pain. For Fern, living in her van was her only option. The town she had chosen to live in with her husband, was eradicated, including its zip code. Then, her husband passed away. The family members that we learn she had left, questioned her life choices and seemed to love her conditionally. But the actual system her whole life fit in too, was one that did not care enough for her or any of its people—it had no qualms selling you a house that it knows you cannot afford and would much rather do so than see the root of its problems and fix what's broken.

Fern's solitude and grief felt like a choice, but her loneliness and the job security she faced was not. The world we live in wants you to work to death. Should you choose to rebel and defy the ways of this world, you're then forced to live at its edges and be lonely and with very few possessions. It has nothing to offer you except the occasional encounter with some friendly 'ghost' communities and maybe, some basic human kindness from time-to-time. For people who have already received more than most other human beings on earth, that touch-and-go support system is probably "good enough" and plenty. Home is, as the movie points out, inside us after all.

However, I don't know that you can find it comfortably—that inner peace—if you can barely afford to repair your van or take care of your health in the first place. We caught many glimpses of the insecurities brought about by a nomadic life. This film reminded me that despite the beautiful and romantic views that #vanlife has been portrayed on social media, when excavated and examined, it isn't too pretty. Ultimately, I'd much rather see all human beings on this planet (without exceptions)  living free and suffering less, so we can all find our true home and within loving communities. But many of us, especially those of us living in the global South know that is currently not the case. On top of the climate emergency, we have wealth and health inequality and all other inequalities that have piled on top of each other to contend with.

I can't imagine how our current economic system and infrastructures as they currently stand can alleviate suffering in the ways that we need them to. I'm speaking for both people and for the planet. The film artfully portrayed that Fern's van-life or any similar existence, might appear to be an autonomous rebellion on the outset, but is an isolated existence founded on the mere illusion of choicelessness.

Nomadland is a film directed by Chloe Zhao, which was adapted from a book by Jessica Bruder.